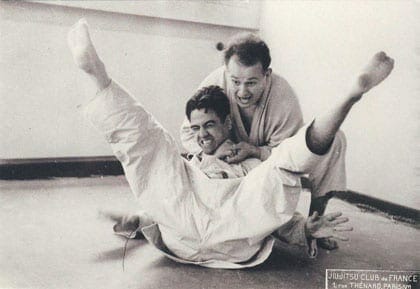 We immediately see that Moshe is focusing on breaking an opponent’s balance. He opens with the suggestion for “two ways of finding out and studying means of unbalancing the human body”. “One, form a broad principle like that of maximum efficiency and then proceed to select by trial and error those movements that satisfy the requirements of least exertion. Second, examine the human body from a mechanical point of view and apply the well-established laws of mechanics to this particular case.” He notes that “Both ways have their advantages and drawbacks”.

Regarding the first way, Feldenkrais says that no special knowledge is needed for it, “and every person is therefore capable of discovering new ways and details and contributing to the general development of the art.” This is the process of natural discovery that every judoka senses after a period of ongoing training. As Feldenkrais wrote about the development of mind and body through the study of judo: “The constant presence of an opponent gradually develops a special attitude of ever-readiness to meet any emergency. Observation and watchfulness are trained by the constant attention to the opponent’s actions. The powers of judgment and imaginative enterprise are brought into play when seeking to find the weak point in the opponent’s position and contriving instantly the means of taking immediate advantage of it.” (Judo, the Art of Defense and Attack, 1941).

“Contributing to the general development of the art” is a significant phrase – it is about the responsibility we take when we are learners of an art and also when we become leading experts of it. At the time Moshe wrote those words judo was young, having existed only about 70 years (Kano introduced judo in 188222). Moshe looked at judo as a method in the process of development. He saw that there is more to the study of a method than just personal development. Our Feldenkrais Method is now about 70 years old. This should be our attitude towards it as well.

So what are the drawbacks? “…each discovery usually becomes a ‘secret’, which the inventor is generally loath to communicate to others so long as he can enjoy the fruits of personal usage of his discovery.”

We seem to be straying into the area of politics here! But what happens if the inventor shares his discovery? Moshe says that even when a personal discovery becomes common knowledge “it retains the mystic character” so that nobody knows why it really works. He cites the example of Koizumi’s discussion on the use of the little fingers of the hands and the feet.

Koizumi closed his book My Study of Judo (London, 1960) with a chapter on “Little Fingers” saying: “A fraction of an inch may stand between working and not working. The length not only affects the power of the lever, but on its correctness, depends the subtleness of contact and direction of the movement…you are able to give subtle touches to the action, for the fingers are more sensitive and dexterous than many parts of the body.”

In the Amherst Training Feldenkrais talked about the power of the little fingers: “It turned out that many experts, many high graded judo people, make this the essential thing of the movement…(and picks a tall student) you see if I pull you up, you won’t, but if I take with the small finger…look (controls the student’s body)”.

(Feldenkrais demonstrates the power of the little finger, showing how it affects the opponent’s balance.)

The second way requires “… extensive specialized knowledge which perforce involves a cumbersome terminology, so that the explanation remains a closed book to most people”.

“It is rational to use both ways”, Moshe said. It seems that he felt that the second way was little known and not in use because “it is easier to make people understand and learn something for which there is logical necessity rather than teach them to remember a series of unconnected arbitrary details”.

Many judo books refer to the skill of breaking the opponent’s balance. I can mention here an old book by Sadayaku Uyenishi, (The Textbook of Jui Jitsu as Practiced in Japan, 1905) Dr. Feldenkrais owned23. Uyenishi wrote a chapter titled the “Principles of Balance”, in which he declared that “Balance is the whole secret of Ju Jitsu both for attack and defense.”

“Moshe read all the judo books and also learned the skill of disrupting his opponent’s balance. His idea was that a judoka should know the “reason” behind the skill. So he enumerated the unique features of the human body:

These four features provide the rational basis for controlling body balance in judo techniques. Dr. Feldenkrais describes those features but reminds us that the human body is not rigid like a pole. So, a well-performed tsukuri should bring the rigidity to the opponent’s body. Also “if we bring both feet together the analogy is complete and the mechanics of a pole apply.” Then throw can be completed effortlessly.

He cites one of his favorite techniques, the okuri-ashi-harai (accompanying foot sweep), as an example of such an action. In this technique we control the opponent’s body by pulling/pushing with the hands and sweeping one leg toward the other, thus bringing both feet together. 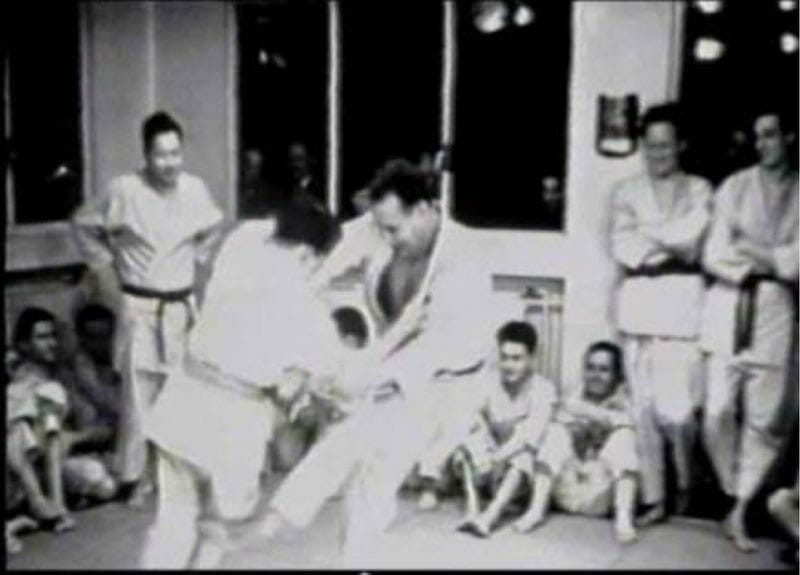 “The rigidity of the body is essential for the transmission of force through it”. When sharply pulling the left shoulder “the body stiffens reflectively and moves as any other rigid body would move”. He explains: “The object of tsukuri is essentially to satisfy the requirements of the four main features enumerated. The great variety of tsukuri is due to the fact that we do not need to satisfy all the four points at the same time.”

Here are the technical stages of tsukuri:

So, to achieve the object of tsukuri “Reduce the range of rotation of the trunk relative to the hips, further increase the rigidity of the body by shifting his weight on to one foot and, thirdly, reduce friction against the ground in one direction”.

Two thoughts come to my mind as I read Moshe’s words about tsukuri:

23. Moshe presented the book to his teacher Koizumi when he left for Israel in 1951. You can find it, with Moshe’s dedication to the Budokwai, in the Bowen collection treasured at Bath University ( http://www.bath.ac.uk/library/services/archives/bowen.html).

24. Takuan, The Unfettered Mind: Writings from a Zen Master to a Master Swordsman

Moti Nativ Talks About Jiu-Jitsu and Self Defense

Moti Nativ Talks About Jiu-Jitsu and Self Defense