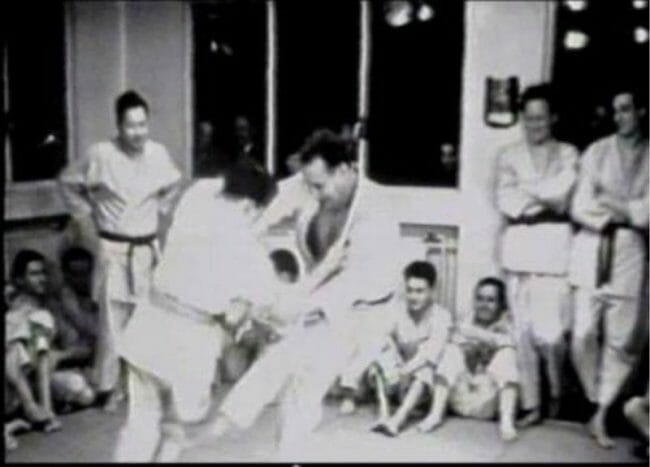 In this section, Feldenkrais answers the leading question, “Of what precisely does that difference of performance consist?” According to him, it is not a skill of one trick or one movement; it is the general manner of doing. The rationale of the elusive difference is based on qualities common to all the masters. He confidently lists those qualities, which implies that he is talking from his own experience and abilities. One must be a high-level judoka to make such observations about the master’s hidden qualities.

I will summarize Moshe’s points and highlight the important details:

The bold terms summarize the master’s qualities and they are concepts that we are familiar with as Feldenkrais practitioners. These points may explain the “magic” in Moshe’s hands: it originally developed through his many years of experience in the martial arts and is fully expressed in his book The Elusive Obvious, chapter “Biological Aspects of Posture”. Looking at the list, we might think about our feelings during Functional Integration® (FI) lessons when we position ourselves, supporting our clients, to direct and push/pull/twist their bodies smoothly to the right distance, with the right speed of the movement, and becoming one body.

Moshe returns to the element of balance he mentioned in Part 1, saying that all the above items describe, in one way or another, the properties of “unstable balance.” Let us see if this could be the answer to the leading question of this article.

He kindles our curiosity: “We are used to hear extolled the extreme “stability” of the judo expert and it sounds somewhat paradoxical to find the word “unstable” used to describe his action”. I think that this is an amazing sentence. I quoted it previously as the opening for my article about “The Paradox of Unstable Stability”19. Moshe claims that “Improper understanding of this point is the major reason of confusion of thought of many judoka”. Moshe uses his scientific brain to explain the mechanics of balance. This is not the first time he talks about balance. He had already done so in his first judo book, dedicating a chapter to the judoka’s balance20.

Generally, we tend to increase our stability by spreading our feet to widen our base of support, or by lowering the center of gravity, or both. This position could be described as “stable balance”. This is what we do when we lack confidence. In this position, more power is necessary to put our body in motion. The confident master has higher control over his body motion, “We have seen that the Judo master behaves as if his body were governed by the principles of “unstable balance” and that he achieves better results than other people even when he has a handicap of weight and strength against him.” In Higher Judo, Moshe uses the term dynamic stability to describe the quality of mastering unstable balance “Dynamic stability is stability acquired through movement”21. In The Elusive Obvious (1981), the term dynamic stability has morphed into dynamic equilibrium, “A posture is good if it can regain equilibrium after a large disturbance” Thus we see that the theories and principles, which Dr. Feldenkrais deduced in the 1940’s, became the bedrock of the Feldenkrais Method.

An important element needed to develop such confidence is the ability to fall. Since Moshe did not mention the subject in this article, I should point out that he repeatedly wrote about the importance of acquiring the ability to fall (The Art of Falling). For instance, in Higher Judo, “The untrained man finds only part of his attention free to deal with the opponent’s action and is so engaged in preserving balance in the most primitive standing position, on two feet, that the only reaction he is capable of is the general contraction of his muscles initiated by his fear of falling”. In teaching dynamic stability, I combine learning the art of falling and recovering stability. Stability and falling complement one another.

Concluding this part, Moshe answers the question of the difference between the master and the ordinary person: “The judo master is merely conforming more truly with principles underlying human structure and he is, therefore, using capacities potentially hidden in every human frame, while the untrained man is deprived of them by his own ignorance.” When the “hidden capacities of the human frame” are used by the master, then he or she is controlling his or her own body (with the seven qualities) while at the same time controlling the opponent’s balance, usually disrupting it.

How can these ideas be taught? How can we close the gap between the qualities of the initiate and those of the master?

20. Stability from ABC du Judo (1938) – “In physics one distinguishes two kinds of balance: stable and unstable balance. A book lying on a table, or a stick or man lying down is simple examples of stable balance. Unstable balance occurs when the center of gravity is high but directly above its support, Such balance is easily broken up; the body falls into a stable equilibrium position. This very simple scientific fact is the very basis of judo. It is perfect knowledge of balance, the manner of breaking it and of recovering it which enables the jujitsian to throw the opponent to the ground with ease without using “force” in the usual sense of the term” (translated from French).

How the Nervous System Senses Differences

How the Nervous System Senses Differences