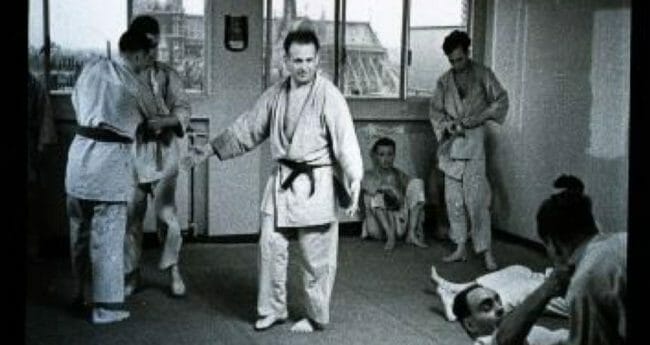 The first article in this series contains clues that, from our perspective as Feldenkrais Method practitioners, we can identify as basic concepts of the Feldenkrais Method. Here Moshe made an effort to provide a logical background for acquiring master skills that cannot actually be taught.

Feldenkrais begins by pointing out the difference in the performance of a judo technique the way Koizumi, the master teacher, performs compared to the learner. He challenges the readers, raising the question “What precisely is the difference in performance?” Could it be entirely a question of balance, as many believed? Moshe said that this would be true “if balance means the balance of mind and body”.17 I would have been satisfied with this answer. But Feldenkrais continued to dig into the question like a psychologist or a philosopher. “We know quite easily how to distinguish such balance when it is there, but our problem is to acquire it, and this is a different matter altogether.”

So what generates such learning? Feldenkrais says that the process has greater complexity than is immediately apparent – “When the mental qualities in question are acquired, certain physical qualities of the body’s behavior appear at the same time.” Feldenkrais shares his own experience as a judo teacher here. From his studies, he declares: “the knowledge of the precise mechanical qualities necessary to achieve physical balance is of great assistance in the process of growth of an active and efficient personality”. Continuing and clarifying, Feldenkrais says that actually “we find ourselves approaching the same problem from different directions but aiming at the same goal”. Feldenkrais continues to ponder the idea of simultaneous improvement in mind and body, which he considers an indivisible unit. Striving for a more tangible explanation of those general concepts, he uses basic elements of practical performance of judo techniques – tsukuri and kake.

Tsukuri means “making”– making an opening, by positioning yourself and disturbing the opponent’s balance. Basically, tsukuri is effected by:

Kake means “applying” – applying a throw, by a coordinated action of the body that will cause the opponent’s body to fall.

Although the technique is performed with one smooth movement, for the purposes of convenience, we learn and practice tsukuri and kake as two distinct elements in a static situation. The challenge is to perform the technique in a free training environment (randori 乱取り).

Feldenkrais uses the term “phrasing” to describe the ability to connect one movement to the next when the two opponents are continuously moving and changing their relative position. The difficulty of phrasing is that the opponents move with the intention to surprise one another, looking for opportunities to attack, as in a combat simulation. Making the opening (tsukuri) and applying the throw (kake) is dynamic. In such a fluid situation there are no precise rules for performing the techniques as practiced in static training. Here is where Feldenkrais’ unique thinking on the matter is most apparent. Feldenkrais wrote that “Phrasing in judo, as in all cases of a dynamic relationship between individuals, is a most personal element.” It is one not easily acquired, because it involves the idiosyncrasies of the individual as a learner.

Moshe suggests that the best way to acquire this “most elusive” part of the art of judo would be to practice with a master of great skill. Here again, however, he raises objections, warning that repeated acts during practice become habitual. Practicing by repeating and imitating the master will not, by itself, lead to mature independence. So how can we discover the quality that the master possesses and that we lack?

Feldenkrais talks about two different approaches. Some people are able to derive benefit from the suggestion of poise and serenity and will put themselves in the frame of mind that will help them control their body as they want. Others will succeed better with slow adjustments to control the body first. Here he again emphasizes that “mental and physical qualities must be present simultaneously”. Quoting from Mind and Body (Feldenkrais’ famous lectures in Copenhagen, 1958), “There are … two major roads to change in a person’s behavior: either via the psyche or via the soma. However, to make change real it must be brought about in a fashion which allows both the soma and the psyche to be changed simultaneously”. Moshe continues his article describing this quality of simultaneous adaptability in the master’s possession: “He is slow and yet always ahead of his opponent”, as Miyamoto Musashi18 wrote in the Book of Five Rings, “Whatever the Way, the master of strategy does not appear fast… Very skillful people can manage a fast rhythm, but it is bad to beat hurriedly. If you try to beat too quickly you will get out of time. Really skillful people never get out of time and are always deliberate, and never appear busy.”

Finally, Dr. Feldenkrais reveals his conclusion (which may not surprise us): “As we think in terms of serenity, the balance of mind, poise, and similar subjective feelings, we can only refer to what we presume to be going on in the mind of the master. What we observe in his action can be described in simpler mechanical terms, which describe what he is actually doing. And the results he obtains depend physically on what he does rather on what his feelings are while he does it or the motive behind his action.” He emphasizes that, although he lays stress on the mechanics of body movements he hopes that the reader realizes that mental qualities are of equal importance.

If we, as Feldenkrais practitioners, reread the section above, we find that it includes ideas that are familiar to us. We are left to wonder how the judokas, the original readers of the bulletin, perceived Moshe’s ideas, which to many of them must have been very new. We are reminded of the chapter, “Correction of Movements is the Best Means for Self- improvement” in Moshe’s book Awareness Through Movement where he gives a detailed explanation of why he chose to give priority to movement in his method.

17. Balance: Judo, as a combative art, or a means of mental and physical training, or of moral and spiritual education, fundamentally evolves on the principle of balance, as do all things in the universe. In action, the balance must be retained: yet to achieve an object, one must run the risk of losing it.

Envisaging the Future of the Feldenkrais Method

Envisaging the Future of the Feldenkrais Method

What is Vision? What is Seeing?  

What is Vision? What is Seeing?