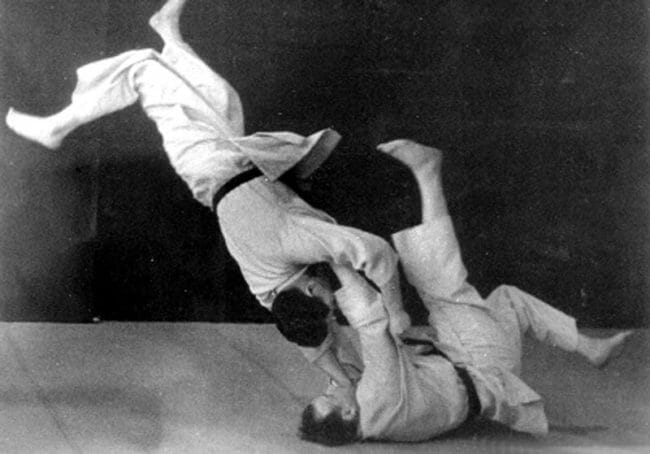 We have waited since October 1948 for Moshe to reveal his fundamental principles for Better Judo. He was fortunate with an article that T. P. Leggett published on the Budokwai bulletin on October 1948, titled “Butsukari”. I should remind you that at this time Leggett was the chairman of the EJU. Moshe praises Leggett’s article and it seems that he uses it as an additional foothold to support his ideas on the fundamentals essential for achieving Better Judo.

Leggett’s article was about the importance of butsukari (now known as uchi komi or repetition training in the western judo world) training for improving the judoka’s performance of throws. Butsukari is a basic training in which the judoka attacks an opponent who is standing still. The judoka enters the preparation stages of a throw. He performs tsukuri (creating the opening and moving into the throw position) and kuzushi (taking out of balance), but stops at the point of the kake (the throwing action). He returns to the opening position to perform this act again and he repeats this sequence many times. In each act, the attacker reaches the peak point when his body parts create connections with the opponent’s body while he pulls/pushes him with his hands. At high speeds, there is an effect of the attacker’s body striking lightly against the opponent’s body. This is the meaning of butsukari – come together or strike against.

According to Leggett, “[butsukari] is one of the important methods of practice, especially for those approaching Black Belt standard.” The principle behind butsukari training is the physiological contention that one must perform a movement at least ten thousand times for it to become integrated into the nervous system. Although that number of repetitions sounds rather daunting, you must take into consideration that because of the speed of action a large number of iterations can be performed in a minute and hundreds in the space of an hour.

What does the “feel” mean? Repetition clarifies the different of elements of the throw. For example:

The judoka achieves a clear sense of efficient body organization necessary to perform a throw without actually executing the throw. Through butsukari the judoka can practice many throwing techniques and, depending on his or her mastery of one technique or another, can make an informed decision about the number of repetitions needed.

On the surface this sounds like quite a boring training session, however, I have learned through long experience that rapid execution of butsukari (hundreds of repetitions in quick succession) is an uplifting experience due to the need of maintaining concentration, the flowing sweat, the intensive breathing that is coordinated with the movements, and noticing how the technique improves and is internalized.

Generally, this is not an approach that we encounter in Awareness Through Movement lessons; however, you have heard Moshe ask that a movement be repeated ten to twenty times and he even instructs us to increase the speed of the action. In the Amherst films of him teaching a “Four Points” lesson, you hear how he asks students to repeat the movement many, many times and much faster. The students are sweating in the summer heat and Dr. Feldenkrais shows them no mercy.

Moshe talks about judokas’ concern “…repeating a movement as often we are advised…when we know that our performance is far from being perfect, are we not going to perpetuate our faults? They are bound to become so deeply rooted that we will never be able to perform the movement really properly?” He also asks “Bad habits being so difficult to get rid of, how can we know that we are doing the right thing?” Let’s examine how Dr. Feldenkrais, in his great wisdom, shows the judoka the way. “The concrete answer to these questions is: hold your body so that the throw you perform forces air out of your lungs without hindrance and without having to make a conscious effort or change of body position and attitude.” So it is fairly simple to ensure this correction.

Dr. Feldenkrais presents the fundamentals of good posture in his book The Potent Self25 which was being written at the same as this series of articles. First of all, he recommends utilizing the principle of executing movements slowly and paying close attention to oneself. Applying this fundamental principle, the judoka will find that he or she can avoid creating unnecessary muscle tension in the shoulders, neck, and chest. Thus basic deficiencies can be avoided and continuing the training will only improve the performance.

Reversibility of the movement is the next important principle he mentions. “A correct movement is so performed that one can stop at any instant and return to the initial position without holding one’s breath, and the body, in general, complying with the preceding rule”.

These principles allow us to judge the action by how much energy is expended and to conserve energy by avoiding unnecessary movements and parasitic efforts. Dr. Feldenkrais advises using someone more experienced to elucidate the process and point out errors or one must be capable of sensing deviations.

He asks, “How do we feel these things?” Dr. Feldenkrais explains the importance of enhancing the ability to sense small differences in our body manipulation through the Weber-Fechner law, even though he does not specifically cite Weber-Fechner. He uses this elegant analogy “Thus, we cannot tell whether there is a letter in a book when we lift it, but we have no difficulty in telling that an envelope contains more than one sheet of paper simply by picking it up…”. This leads him to “The main thing is to understand that, when we make a big effort, we cannot “feel” any small reduction or increase; there must be a large difference before we become aware of it.” When the body is well organized at the vertical position we can sense very slight extra efforts. Then “We assume a new position in which the muscular effort is smaller than before and we become capable thereby of feeling [awareness of] even slighter imperfections. We cannot but go on improving”.

He disagrees to a certain extent with Leggett’s statement, “We can understand now why butsukari practice is normally more beneficial to advanced students who already have a rudimentary feeling of correct movements. They produce the movement with reduced effort and their progress is assured”. Dr. Feldenkrais maintains that beginners, who have learned these principles of achieving a goal, can find their training sessions “beneficial and more entertaining.”

“I do not teach you but you are learning” is a well-known phrase that Moshe often repeated to his students. Better Judo explains this sentence. The gap between teaching and learning is understood when Moshe says that such “secrets” cannot be taught but they can be learned.

Throughout this series of articles, which were written over the span of a year, we witness a period of integration of judo and the Feldenkrais Method. We clearly see how Moshe guides the judoka, coaching according to ideas and principles that we now know as the fundamental theories of the Feldenkrais Method. These principles indicate the trajectory that will provide the judoka motivation for mature self-learning.

These ideas and principles can be summarized in a simple list:

We should not forget that Moshe’s thinking about the principles of learning coalesced through his practical experience as a martial artist. His encounter with Kano and subsequent dedication to judo was a significant turning point in his outlook. I believe that judo delineated the path that leads to the development of what is known today as The Feldenkrais Method.

I noted the change in how Feldenkrais related to using oneself; useless effort, use more sense. Dr. Feldenkrais taught martial arts and from 1933 he taught judo. In Judo and the Art of Self-Defense (1941), he wrote extensively about the image of action and the importance of orientation. His thoughts on the importance of executing an action slowly during the learning process can be found in Practical Unarmed Combat (1942). It is obvious that he developed his basic principles long before he devoted himself exclusively to developing the Feldenkrais Method.

Some of the main principles are:

When I decided to write an article about Dr. Feldenkrais’ judo series, I did not realize what I had taken on. This was not such an easy mission and I feel that what I have written is dwarfed by the power of Dr. Feldenkrais’ insights. I hope that my writing will provide some benefit for the Feldenkrais community, martial artists, and anyone who has taken the time to read the article.

I feel that it would honor Moshe Feldenkrais to close with words of G. Koizumi, his most valued Judo teacher: “Indeed, we realize as we make progress in training that self- confidence is the first line of defense and the factor for disarming; security is not secured by security measures alone; contentment is not obtainable by gaining, but by giving. Happiness is found not by external seeking, but by researching within. All things are necessary components for man’s advance toward maturity”. Gunji Koizumi (My Study of Judo, 1960)

Photographs are from the IFF archive and the private collection of Moti Nativ.

A big thank you to Adam Cole for his indispensable help when I started with this project.

Thanks to Leah Smaller for her support in editing and translations.

Special thanks to Ronit Zilberman (my beloved partner).

What is the Feldenkrais Method?

What is the Feldenkrais Method?

Tai Chi and the Feldenkrais Method

Tai Chi and the Feldenkrais Method

Reflections on Feldenkrais Alexander Yanai Lesson 303, The Line of the Ball that Rolls

Reflections on Feldenkrais Alexander Yanai Lesson 303, The Line of the Ball that Rolls