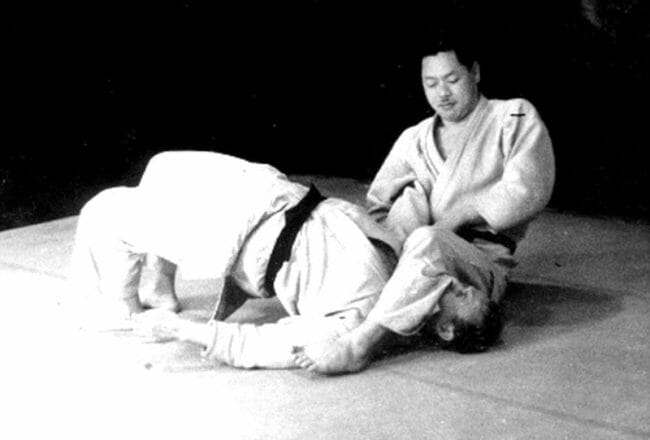 A surprise opening for the fourth part: “At least one of the readers is disappointed with Better Judo. I guess that this could mean more than one or even many readers.”

Moshe thinks that the Budokwai judo practitioners, who read his article, expected that “the secret of Judo will be divulged and the perfection would be within easy reach of every reader”. On the other hand, he sees the positive aspect of having secrets in the Dojo. “Imagine a dojo where everybody is simply godlike and has nothing to learn from anybody, being just perfect. This would be boring”, he says. Maybe he is rebuking the critics or he is angry and is trying to give the impression that he is above this situation: “I am curious to know how many more readers I have disappointed. The worst criticism is indifference. I should be very glad to have any other criticism no matter how devastating”.

Truthfully, I hesitate to write about Moshe’s response to the readers, because I do not see the contribution to the professionalism of Better Judo. However, such interruption gives us the information that Moshe is writing while he is on his own journey, active in the Budokwai Club, connected with members of the club, sharing his way of thinking about judo and generally the way to use the body. Around this time Moshe was recognized as a real judo expert and was chosen to be a member of the Council of the European Judo Union. Also, at this time, Koizumi had just completed reading the draft of Higher Judo and wrote the foreword for the book. Moshe again addresses the issue of professional “secrets” in dojo. We feel that Moshe is touching on politics as he says that “Outside the Budokwai and the Kodokan important rules are often kept as “secrets” and sometimes sold to keen and persistent students”.

My thoughts are that “secrets” are a kind of creativity, being personal discoveries about manipulating the body, an almost instinctive level of coordination of to where and when. Such discoveries are a result of the learning process. Meaning that more than one person would likely discover the same secret as he continues on the judo way of learning. We already understand that in order to know such secret, even if it was revealed to you, one still needs to “discover” it by the same learning process of practicing and training the body until the secret is owned. Moshe lists some secrets, “all observable in the action of judo masters”, while implying that there are more.

For us Feldenkrais Method practitioners, he wrote, “It is not enough to know what to do to make good judo. The means to enact the rules are obtained by clearly visualizing configuration and for that, understanding and muscular feeling obtained through experience are indispensable”. In our terminology of awareness through movement, we say “…it’s essential, following the general principle that it doesn’t matter what you do, but how you do it…” (Moshe Feldenkrais, San Francisco Training, June 26, 1975)

As I pointed out earlier, you can be sure that Moshe understood those secrets in his body and had the ability to use them. Let us look more closely at some of the secrets that Moshe listed:

“Hold your body so that the action of kake forces air out of the lungs without resistance or conscious awareness.”

Meaning that while the tsukuri, making the opening to prepare the opponents body to the act of throwing, you preserve a good posture so the throwing action is performed with no inner resistance. Read Moshe about what is good posture.

“Start the movement with the hips, or more precisely, with the tanden, leading the body and the members, and not inversely as the poorly coordinated do”.

Read Awareness through Movement – What Action is Good? “Use large muscles for the heavy work – in a well-organized body work done by the large muscles is passed on to its final destination through the bones by weaker muscles, but without losing much of its power on the way.”

“Put your legs on the ground so that the vertical line passing through the middle of the kneecap of the weight-bearing leg passes exactly in the space between the big toe and the next.”

To this “secret” I will not add anything, as it is simply a good suggestion for standing, walking, running, and even sitting.
We see that many of those secrets are incorporated into the Feldenkrais Method as techniques and principles.

I find that the closing paragraphs of this part are most sophisticated. Moshe is challenging the judoka, presenting his ideas about a good learning process. Through my perspective of an experienced Feldenkrais Method practitioner, I can cope with the sophistication of such a presentation, but it occurs to me that it might have been peculiar for many judokas. Again Feldenkrais says “It is not enough to know what to do to make good Judo”. He goes on to explain that enacting the rules by visualization of their configuration requires physiological understanding that can only be obtained through experience – meaning training.

He also proposed this idea: “You will find it very instructive to break these rules deliberately and then to repeat the movement strictly observing them. Try them one by one. You will see that the movements in which you are normally more successful, you do in fact unintentionally abide by them. You may find it easier after that to extend their application to movements which have felt foreign to you hitherto”. I’m sure that such a concept was not accepted by many judoka, but we already have accepted it as a contrivance to enhance learning. We often encourage our students to make mistakes and not to succeed. Could this be a way to break habits?

Another confusing point that comes up is that “these rules should be visible in our movement, but that there should be no intentional observance of them”. As I read it, this is the goal of the judoka, to perform the “secrets” spontaneously and naturally.

The next, and last part, of Better Judo, lays forth his purpose in writing these articles “…to clarify the more fundamental principles from which the above rules, and many others, are a natural consequence…one cannot fuse rules and corrections into a coherent whole by simply practicing them”.

Pelvic Health and Awareness for Women and Men Article

Pelvic Health and Awareness for Women and Men Article

Awareness Through Movement for Musicians

Awareness Through Movement for Musicians

A Crisis of Perception

A Crisis of Perception